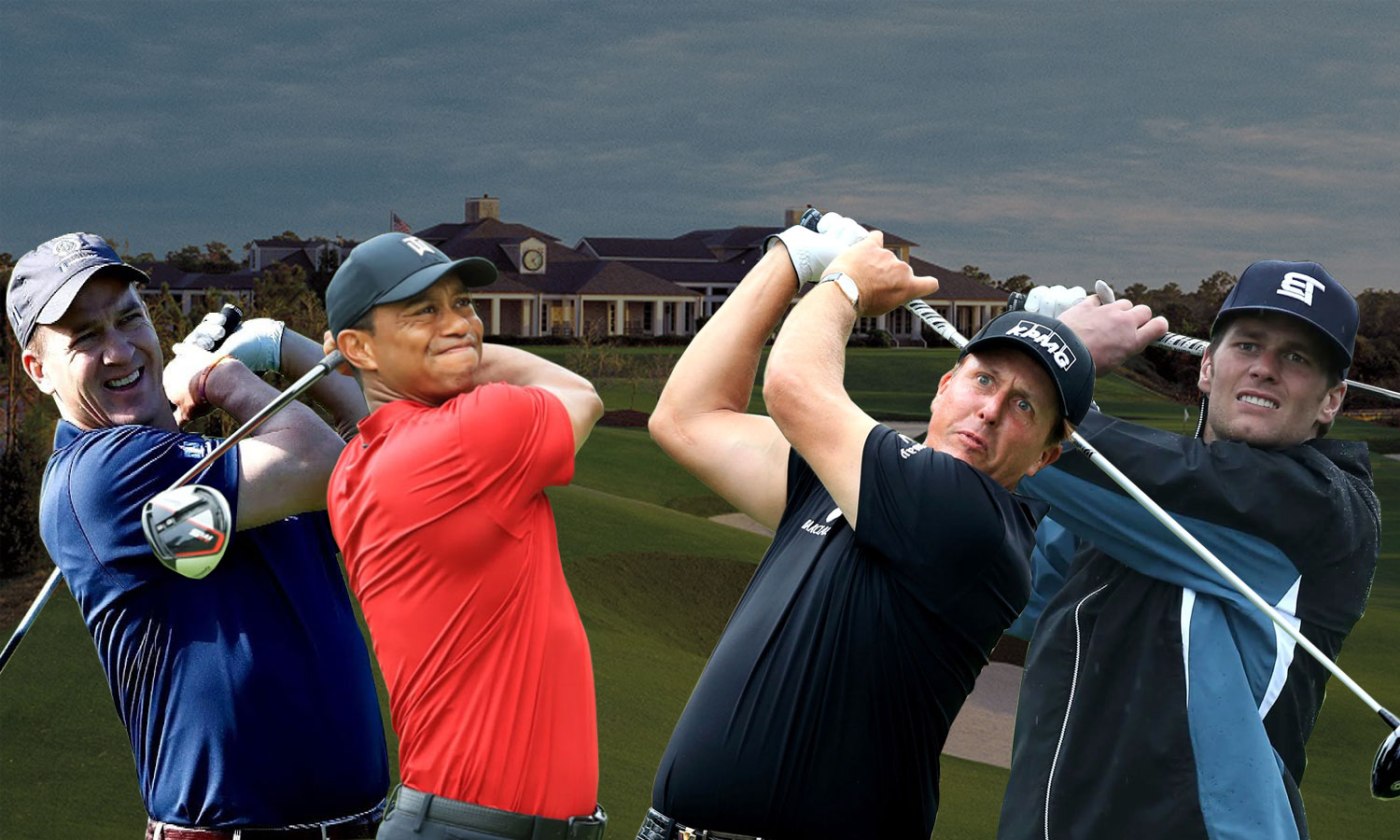 In case you were sleeping under a rock yesterday afternoon, or already 15 bud lights deep into your Memorial Day weekend, you, like every other sports starved fan in the world got to watch some of the first live sports in months with the “The Match 2”. It featured Tiger Woods and Peyton Manning vs. Phil Mickelson and Tom Brady.

Everyone knew that the trash talk between these groupings would be prevalent given the egos and personalities involved and it didn’t take long before shots were being fired. They hadn’t even made it to the first tee yet before Peyton starting giving it to Brady and even brought his brother Eli Manning and Nick Foles into it.

You knew right then that these guys were definetly comfortable around each other and it was going to be a entertaining day watching them compete on the course. The football players weren’t the only ones with expertise in talking trash though, a little later Tiger gave Phil Mickelson a nice barb about never winning the US Open.

Tiger wasn’t done either, he hit Brady with maybe my favorite line of the day after Brady shanked yet another drive early on.

Anyone that’s ever played golf (and sucked at it) has heard that joke before and it plays everytime. Tiger’s delivery was perfect though, just so matter of fact with it. It was awesome. It was right around this moment I knew we had something here and it was going to be far more entertaining that lasts years match that was just between him and Phil Mickelson.

To Tigers credit, and to the delight of many of his fans, he looked very sharp yesterday which is a great sign considering he missed the majority of PGA events earlier this spring before everything was cancelled due to COVID-19. While The Medalist Golf Club where this took place is basically Tiger’s home course, (they even have specific tees for him) it was was still nice to see the 2019 Masters Champ out there doing his thing and gives hope that more wins could be in his future.

One guy who was not playing well at all on the other hand, was the GOAT of Football, Mr. Tom Brady. That one he shanked over to the 7th fairway wasn’t his first or last errant shot of the match.

It was actually sort of refreshing to see someone as perfect as Brady appears, to look exactly like me out there on the course at times. Being a life-long Patriots fan and still salty about Brady leaving for Tampa Bay, one side of me was filled with a sense of giddy-glee everytime he shanked one. The twitter trolls were out in full force as well, like sharks in the water they were getting their first sniff of Brady blood in 20 years and were loving it.

But the other side of me remembered all the joy he has brought me in my life over the years and was rooting for him to pull it together. And just when it seemed he wouldn’t make a Par all day, all it took was Charles Barkely talking a little shit in Brady’s ear and he goes and pulls this shit. GOAT status reconfirmed.

Just an unbelievable shot, definetly the shot of the match and just like that Brady’s attitude did a 180 and he started to lighten up and talk trash of his own. He’ll probably call up MJ later on and trade stories about telling Charles Barkely to suck it after shoving it back in his face. What a moment. I mean he put so much effort into that shot he even ripped his pants. What an athlete.

Honestly I don’t know Barkley has any ground to talk smack when he swings a club like this.

Back to the match itself, again unless you live under a rock or have no internet in quarantine you know that Tiger and Peyton ultimately pulled it out, winning by a hole even though Tom and Phil made a later charge on the back 9 after being down three holes. It was honestly a great day for not only golf but the world of sports, here’s a few more of the best moments of the day.

Justin Thomas honestly did an amazing job on the broadcast too, and this was his best line of the day aimed towards Barkley. Hilarious.

I was actually really impressed with Peyton’s game overall too, I guess that’s what retired life will get you.

Brady still salty over that Eagles Super Bowl too.

Brady had some barbs of his own aimed towards Manning too.

Overall, despite the weather yesterday it was such an amazing event. These four guys really put on quite the show for us sports-starved fans and I know personally I am really grateful for that. Watching live sports again felt like a break from reality for a few hours. Not to mention the fact these guys made a boatload of money for for the COVID-19 relief fund, 20 million is nothing to sneeze at. Kudos to these guys.

P.s. Would you have ever thought Tiger was that much shorter than these guys, I mean I know Peyton and tom are like 6’3 & 6’4 range, but I had no idea Phil was 6’3 too. Online it says Tiger is 6’1 but judging from this picture thats like an NBA height, like when they say Kevin Durant is like 7’2 when he’s really like 6’10. I hope Tiger doesn’t catch a glimpse of this photo because his ego might resort back 08′ Tiger and start going wild again. Thank goodness Perkins restaurants are to-go orders only right now.